How donors are enabling research 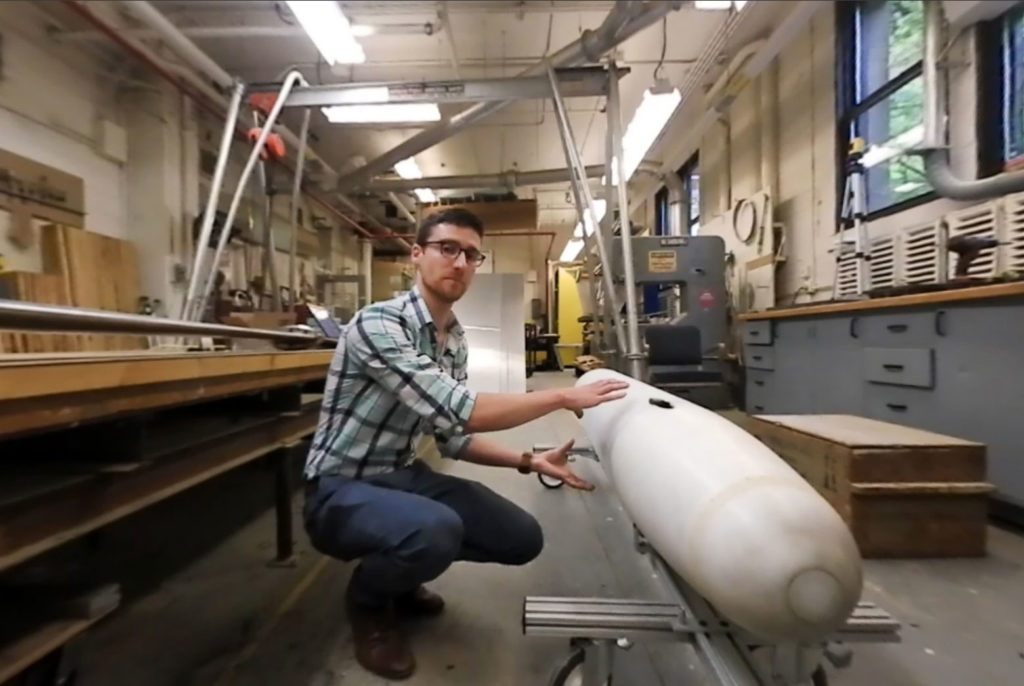 IMAGE:  Some of Michigan Engineering’s most ambitious plans for research get essential support from donors. This includes Naval Architecture and Marine Engineering. Here James W. Gose, then a NAME PhD candidate and now an assistant research scientist, works on a submarine model with an ultra water-repellent coating.

When John Couch turned 18, his father told him he could go to any college he wanted – as long as it was the University of Michigan.

His dad, Richard B. Couch, had a pretty sensible reason for this, since as a new U-M faculty member in 1957, he had three kids to put through college. The elder Couch had recently left as Chief Naval Architect with the U.S. Navy’s Bureau of Ships to become chair of Naval Architecture and Marine Engineering (NAME) at Michigan Engineering, so his kids were now eligible for low in-state tuition.

So young John went to Michigan. He didn’t know much about naval architecture or marine engineering or even college at that point. In fact, he jokes that he drew the short stick with engineering since his sister became a doctor and his brother a lawyer.

His knowledge of the field, however, ended up going deep. After earning undergraduate and graduate degrees at U-M, Couch (BSE NAME ’63, MSE ’64) worked in ship design and building operations, including as the chief marine engineer at a major shipyard on the Gulf Coast. After earning an MBA at Stanford, he joined and later headed an ocean shipping company based in California and Hawaii before turning to investment management in Silicon Valley.

He also stayed connected with the College, establishing the Richard B. Couch Professorship at NAME in 2005 in honor of his father, and serving as a longtime member of the NAME advisory board. His experiences provide a firm understanding of what the department needs.

“It’s clear to me that technologies like artificial intelligence, robotics, virtual reality – they will influence all disciplines,” he said. “All engineering departments need to move forward with new challenges, new technology. It’s been part of the conversation for years with NAME: Stay ahead of the game.”

In support of this goal, this past year he pledged another major gift toward enhancing NAME facilities. He is a major contributor toward planning currently underway that will include the types of research facilities that will keep NAME on the cutting edge.

“The challenges for higher ed are really formidable, and the future is changing so fast,” Couch said. “I’m very eager for NAME to continue to fulfill its mission and stay the premier program in the world.”

Research is one of three pillars for this vision, so continued support in this area is essential. The vision calls for Michigan Engineering to provide scientific and technological leadership for the common good. As a result, much of the research the College aims to do is based on impact – both through leadership in higher education, and by impacting people’s lives through bold and broad- based projects.

“We are aiming to tackle global challenges that can’t be solved without engineering, nor can they be solved with engineering alone,” said Alec D. Gallimore, the Robert J. Vlasic Dean of Engineering, the Richard F. and Eleanor A. Towner Professor, an Arthur F. Thurnau Professor and a professor of aerospace engineering.

Blue Sky projects are a strong example of this. Angela Violi, professor of mechanical engineering, chemical engineering and biophysics, leads one of four research teams that have been selected as Blue Sky projects. e team aims to develop new antibiotics to thwart bacteria that are evolving to resist our current classes of antibiotics, which were invented 30 years ago.

“If we don’t get this under control soon, antimicrobial resistance will take over cancer in terms of being the most dangerous killer for humans,” Violi said.

Blue Sky was created by Michigan Engineering as part of the strategic vision. e funding model selects high-risk, high-reward faculty projects with the potential to secure external investments and expand in order to solve big world problems. Violi’s project was selected by the College because it t these criteria. It also received funding from Rich Lesser (BSE ChE ’83), whose gift is an investment in the idea that innovative research can address societal problems.

Another Blue Sky project, the Global CO2 Initiative, aims to remove carbon dioxide from the air and turn it into useful products, possibly construction materials or fuels. e original initiative was started by donor Bernard David and has also received nancial support from Mac McQuown.

The ECE Innovator Program is another example of donor support for research. Supported by Rick Bolander (BSE EE ’83, MSE ’85), the program aims to inspire and facilitate the commercialization of research conducted in electrical and computer engineering by hosting a competition for entrepreneurial teams.

“I felt that there was incredible creativity and innovation coming out of ECE that could solve big, audacious problems,” said Bollander. “And while I work in Silicon Valley, where the main thrust of value creation is from software companies, I felt there was a lot of merit, talent, capacity and opportunities to build innovative hardware products at Michigan.”

Creativity, innovation and daring are among the values underlying all aspects of the strategic vision. In the ECEwgere Innovator Program’s initial round in 2018, the team that won funding is SkyGig, a communication startup that is set to oer a wireless technology platform that improves 5G. It oers higher speeds, lower power requirements and lower cost than the current market oerings.

As Michigan Engineering 2020 continues to progress, other innovative gifts are in the works, entailing new investments to enable translation of research to the marketplace in ways that impact people’s lives. Gifts continue to play an essential role in robotics research, including facilities for land, sea and air. Central among these facilities is the Ford Motor Company Robotics Building, on track for completion in early 2020.